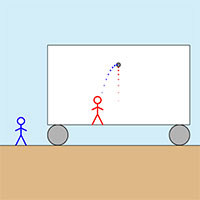 Instructions: Press start to add a horizontal velocity (constant) to the ball and the train car.
Explanation: Galileo was among the first to point out that velocities can be relative. His example took place in a boat where an observer below deck in a cabin was watching various things move. If the boat is moving steadily (i.e. not rocking or changing speed), then the inside observer will not be able to tell based on their observations of the moving objects. Here we have one observer in the train car, and another at rest on the ground nearby. The observer in the train will say the ball is just bouncing up and down, while the observer on the ground will say the ball is also moving to the right. But, they're both totally correct. Since there is no acceleration of either frame, then they can be called inertial reference frames.

Link to stand-alone sim: Here is a link to view the sim on its own, with no distractions.

Embed code: Use this sim on a webpage. Copy the code block below, and include it anywhere on a webpage to show the sim.