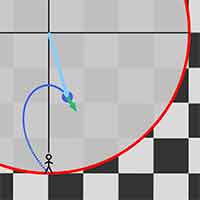 Instructions: Use the two sliders to adjust the speed and angle of the ball. Click to start to launch the projectile. Note how the motion is a straight line in the inertial frame, but in the rotating frame, the pseudo-forces cause it to appear to move in a different path.
Explanation: The Pseudo-Forces that are created if you are in a rotating reference frame are described by the following equations $$\mathbf{F}_\textrm{rot} = \mathbf{F}_\textrm{in}\; \underbrace{- m \boldsymbol{\omega} \times \left( \boldsymbol{\omega } \times \mathbf{r} \right)_\textrm{rot} }_\textrm{centrifugal}\; \underbrace{- 2 m \left( \boldsymbol{\omega} \times \mathbf{v}_\textrm{rot} \right)_\textrm{rot}}_\textrm{Coriolis} \; \underbrace{- m \left( \dot{\boldsymbol{\omega}} \times \mathbf{r} \right)_\textrm{rot}}_\textrm{Euler}$$ This simulation allows you to launch a projectile and then observe the motion as it would happen in both the intertial frame as well as the rotating frame.
Some things to try. Can you find an initial trajectory that allows the person in the rotating frame to catch the ball after some time?
Also, note how the trajectory is a straight line in the inertial frame, as it should be if no forces are acting on it.

Link to stand-alone sim: Here is a link to view the sim on its own, with no distractions.

Embed code: Use this sim on a webpage. Copy the code block below, and include it anywhere on a webpage to show the sim.